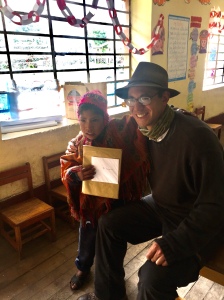 Interconnectedness. That would be the word that comes to mind when I think of working in collaboration with the high Andean community of Cuncani on the lunch program and other localised community development projects in the Urubamba province. In order to learn and understand how such a rural community operates and functions, one needs to invest patience and a lot of time in creating those vital relationships with the people.

In attempting to understand the hierarchical socio-political structure, the position of each family, individual community members, the role of the local primary school teachers, the relationship with local government, this cannot be done without simply spending the time with people and learning about them all as human beings. The first stage of learning is listening. Listen to the stories, listen to each person who makes up that community and you will eventually discover the interconnectedness of each person within that community.

In Andean Quechua-speaking communities, there is reference to the concept of the ‘ayllu’ that dates to pre-Colombian times and the days of the Inca. The concept isn’t simply a theoretical socio-historical notion of ‘community’, however. It is a lived, ongoing experience of community identity; each member of the ayllu an integral part of the community and serves the community in a specific role.

In this, the interconnectedness with the land is centrally important, as in the culture of the ayllu, there is no private ownership of the land as each family has specific plots which they serve and work for a certain period of time, but it remains under the general stewardship of the ayllu.

The notion of reciprocity (‘ayni’) is at the foundation of community life – community members work together, for one another, for the benefit of the community. This act of reciprocity is illustrated through the ‘faena’ – whereby the community voluntary, or is called upon by the President, to work together on a community project, such as building a greenhouse, harvesting crops, digging a well etc. Historically, the ‘faena‘ was a way to maintain community cohesion through linking the present with the past, unfortunately now, there is an increasing feeling amongst the older generation that this sense of tradition and cohesiveness is being lost due to the fact that more members of the younger generation feel obligated to participate in ‘faenas‘ and work so they do not have to pay a penalty fine to the community.

All community members serve to work the land together; shared knowledge is passed on between generations and consistently added to. The sense of reciprocity is alive in knowledge exchange within the community. In the current context of climate change and ecological disasters, knowledge exchange within an ‘ayllu‘ means that families know exactly which particular variety of potato can grow at 4,000 m above sea level, and which ones cannot. They know which crops are likely to thrive at an altitude of 3,800 m as opposed to 4,400 m. They know exactly where the sheep and alpacas can graze during the hard, arid winter, and where to move them during the wet, summer months.

The identity of the ayllu, however, does not only reflect a specific culture of a community and its interrelations. Ayllu also means what we understand as ‘kinship’, essentially, the ayllu extends out from the community and includes the complex web of all social, cultural, economic relationships that exist. In this sense, ‘ayllu‘ includes all extended family that have some relationship with that community but living elsewhere Importantly, it also includes all those who have created those key relationships with families from the community and individual members, be they teachers, trades people, and NGO workers.

What I discovered is the importance of the sense of the ‘ayllu‘, represented much more than the individual families of the community. ‘Ayllu‘ is the living embodiment of one single, community identity that is reflected in its interconnectedness with the land, and the sense of kinship that is consistently evolving and extended outside of the physical boundaries of the community. The late, great Peruvian anthropologist, Carlos Ivan Degregori famously stated that, “there is no country more diverse”, when writing about the history of Peru. I don’t believe this was a flippant comment with an arrogant intent. In reality, Degregori revealed the inherent nature of that interconnectedness between all Peruvian peoples as reflected in the sense of ‘ayllu‘. That whether we have been to Cuncani, or not, we are tied together by those bonds of kinship – we are interconnected to one another. What we do in our own part of the world, however small our actions, does have an impact on someone on the other side.

What these current challenging times has reminded me of, is that we are all interconnected and part of a greater ayllu; that our action or inaction does not exist in a vacuum. During this time our sense of interconnectedness naturally brings about reassurance and comfort that we are not alone, but it should also encourage us to move to action.

Finally, if you’re looking for a way to support our organization, please do check out the wonderful digital artwork created by my colleague, Kenji Misawa. Please do feel free to purchase one of his great pieces of art! All money raised from the sale of Kenji’s work will go towards supporting our work in Cuncani. Contact us for more information.

Jean-Gabriel is a member of our Advisory Board. He spent almost five years working for Nexos Comunitarios, principally in the town and area of Urubamba. JG was the General Coordinator for Nexos Voluntarios (NeVo) between 2011 – 2013, and then the Program Director (2014 – 2015).
After returning to his native UK and studying for an MSc in Globalization & Latin American Development at University College London, he currently works for one of the UK’s largest charities.

These can be hopeful times.
Consider an eleven-year-old member of his local football club in a part of Cape Town, South Africa. A nationwide lockdown took effect and he could not go to the field to train or school to learn. Neither could his two siblings. They could not go beyond their driveway. In their backyard garden, they resorted to kicking a ball against the fence with their neighbor friends on the other side. Mimicking the action made it seem like a passing drill as part of their regular training. This eleven-year-old was also a manager. Okay, it’s a fantasy football team, but he did his homework. He’d been doing well, listening to the football podcasts to gain insight on players, stats and tips. He was earning extra bonus points each week against his fierce rival – a fantasy team managed by his mother. The friendly rivalry is on hold until Premier League recommences.

Remember Yahuarcani, the painter. He’s given a chronicle of the circumstances in which he is living in currently, in quarantine, in his home district of Pebas, Loreto. It is one of several places in Peru where cash-strapped residents cannot collect the government bonus because there is no money, a cruel irony.

A man carries a log of wood on his shoulder. A fisherman swiftly paddles his home. Girls look fearfully at the military from their windows. About thirty women queue at an agent of the Banco de la Nación. A lady goes to the Health Center for dengue and cannot be treated. Uncertainty and anxiety have fallen on the town like a torrential rain that does not know when it will end. With faces overwhelmed, many listen to the loudspeaker for the latest report of infected by Covid – 19 in Iquitos . There is a funeral silence in the small port and market, once bustling. Rice, sugar, oil have risen in price, an egg costs one sun and fish is scarce. The discomfort is visible on the faces.

Some arrived the night before from Iquitos , fleeing in a boat or hiding among the products of the motor ship that has the exclusive permission to only transport cargo. The people fear the worst: an infected person.

Pebas is one of the four districts that make up the province of Ramón Castilla, in Loreto and integrates 60 communities into its territory. It is located at the mouth of the Ampiyacú river in the Amazon and has a population of 12,694 people, according to the 2017 census. It has two agents from the Banco de la Nación who always lack funds. Many people have benefited from the 380 soles voucher announced by the Government, and the queues were immediate. They start at six in the morning and last a little beyond nine. The withdrawal of money is basically conditioned on whether there were deposits on the previous day. Otherwise, there will be no withdrawals.

The communities have been demanding for many years the opening of an office of the Banco de la Nación , since that would mean economic savings and would alleviate a long trip of 13 to 18 hours to the provincial capital or to Iquitos. In writing this note, many people tell me that the president’s announcements are useless if there is no place to collect the 380 soles.

Pebas also has a health center and 12 health posts, the service is not optimal, professional staff and modern equipment are required. For some reason that no one explains, the doctor always ends up prescribing paracetamol or ibuprofen for all illnesses. If COVID-19 arrives, it will be an unprecedented catastrophe. Electric power is provided from six in the afternoon to eleven at night, so the aforementioned education on television, radio and internet will be impossible.

Pebas is also the gateway to the native communities of the Uitoto, Bora, Ocaina and Yagua nations, located along the Ampiyacú and Yaguasyacú rivers. The yaguas have been settled there for hundreds of years and with respect to the uitotos, boras and ocainas, their recent history is linked to the dark rubber era and if we talk about diseases, let’s not forget that these three nations were devastated at the beginning of the last century by measles.

COVID-19 reaches the indigenous world at its worst: extreme poverty, anemia, hepatitis B and C, diabetes, malaria, dengue, oil spills, assassinations of social leaders and historical abandonment by the State, are just some of the pathologies that afflict and take their toll on indigenous people.

The native communities have taken their own measures regarding the pandemic, have closed their borders, are monitoring their rivers, which has led to a shortage of essential products such as medicines, food and the trade of local products. State intervention at the moment is crucial for the survival of the communities that have their rivers and polluted lands, where there are no fish to fish, no products to harvest, or animals to hunt, where the S / 380.00 bonus is insufficient to feed a family and where health centers lack essential medicines. There is also an urgent need for strict surveillance of foreign vessels and people towards indigenous territories. A true rapprochement of the State towards the indigenous is urgent.